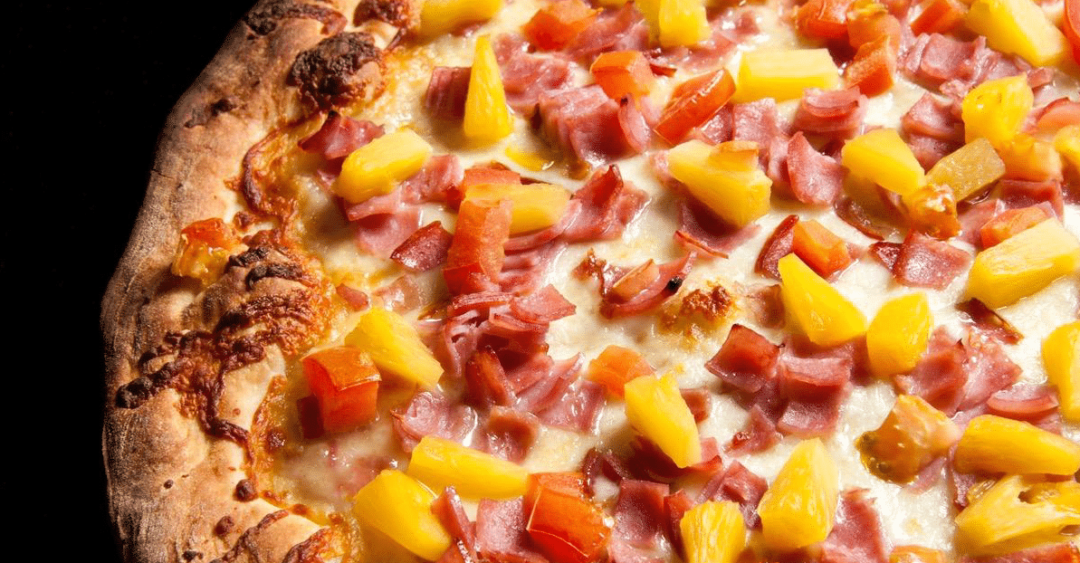 Pineapple on Pizza; the Great Debate

There are a number of love-hate topics of conversation that can bring discord to the most civilized of discussions. The Yankees, Justin Bieber and disco are but a few. But more than all other love-hate topics, there is nothing that can bring out the worst in die hard pizza lovers than topic of the pineapple.

There are those that are vehemently opposed to pineapple anywhere near pizza, there are others that celebrate pineapple in all its glory and there are but a few that are on the fence and open to trying this contentious combo.
But is pineapple getting a bad rap? Pineapples are a tropical plant, an edible fruit that is rich in antioxidants and boosts immunity. Looks great as a garnish on your pina colada or in an upside-down cake, but does it belong on your pizza pie?

The Traditional Hawaiian Pizza was recorded as first being served at Francine’s Pizza Jungle in Portland, OR in 1957. There are other pizza purveyors that claim to be the first, but that too is up for debate. Hawaiian pizza typically has salty ham and sweet and tangy pineapple and is the most popular way people have pineapple on their pizza. Sounds good so far, what’s not to like about ham and pineapple? But if you are not up for this particular pizza mix, perhaps another pineapple combo might work for you.

BBQ chicken with pineapple pairs zesty BBQ sauce with pineapple for a sweet and savory treat. Ready for a little heat? Why not combine jalapeno, pepperoni and pineapple? The sweetness of the fruit and the spiciness of jalapenos could make for a mouth-watering meal. In fact, there are so many more delicious combinations where pineapple could be a great addition; sweet and sour shrimp pizza, BBQ pulled pork pizza and chicken teriyaki pizza might just be able to sway the most die-hard anti-pineapple pizza fan out there.

And while maybe no one in this debate has been convinced one way or another, pineapple may not be that bad when you consider what other countries put on their pizza.

For example; in Finland, chanterelle mushrooms, red onion and reindeer are all the rage. Japanese pizza lovers replace traditional tomato-based pizza sauce with squid ink and use a wide variety of seafood as toppings. In Russia, a popular cold pizza combo mixes tuna, sardines, salmon, mackerel, red herring and onions. The French are tres chic with a sunny side up egg served atop arugula, spinach and cheese. Australians favor kangaroo, crocodile and emu toppings while those in the United Kingdom find a haggis (pudding made from sheep’s heart, liver and lungs) pizza the bee’s knees.

So, in the end, whether or not you say yea or nay to pineapple on pizza, the one thing that we can all agree on, here or abroad, is that pizza, no matter the toppings is one of the best foods ever and bonds us all together. And not to create another debate, but let’s all pass on tuna, sardines, salmon, mackerel, red herring and onion pizza.